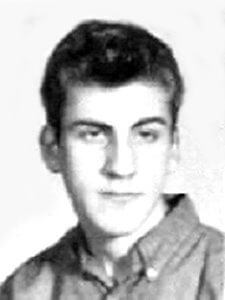 Stephen Chester Ponty was born on May 28th, 1949 in Monmouth Junction and attended South Brunswick High School. He enlisted in the Army and his tour of Vietnam started March 8th, 1968. Stephen served in the 187th Assault Helicopter Company. He was a Specialist 4 and worked in helicopter repair. Stephen Ponty was killed in action on December 28, 1968 creating a smokescreen so the Command and Control Aircraft could land safely.

Click here to view a video about Stephen Chester Ponty’s tour in Vietnam.  This video was created by Lorena Chiles, a senior at Westlake High School in Austin, Texas.  Background information was provided by James Zinsmeister South Brunswick Sports Historian.