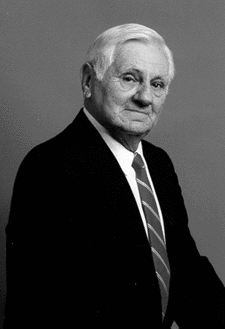 I don’t know what it is and I don’t know how to fully explain or even comprehend it, but all board members, past and present, seemed to have a characteristic, espirit de corp, that has made all our dreams come true. From those humble beginnings of board members sitting on the front steps of the Municipal Building planning a facility- watching the late summer setting sun in 1966 – we see an edifice- not only to house books, but to be a center of many related cultural functions and activities important to S.B. and to posterity.


Dr. Richard Ilnicki was born in Vermont in 1928. In 1932, his family moved to South Brunswick. In 1949 Ilnicki graduated from Rutgers with his BS in agronomy, and in 1951 graduated with his master’s from Rutgers in agronomy and plant physiology. He received his PhD from Ohio State University in 1955 before working as an agronomist with the US Army. After his tenure in the army, Ilnicki worked at Rutgers University as a professor of weed science. He was also the former chairman of the Northeastern Weed Science Society and the Weed Science Society.

In 1965, Ilnicki ran for a seat in the township council and lost. The next year, he was elected GOP Club Head. This same year, he announced that he was going to be running for township council once more, alongside incumbent Frank Chrinko. The two Republicans ran with the goal of maintaining two party seats against the Democratic majority. They were successful, and in November 1966, Chrinko was re-elected to the township council while Ilnicki also won a seat. Alongside them on the Republican ticket, Joseph Rauch was re-elected tax collector. Later, in 1969, 1970, and 1972, Ilnicki was elected Mayor of South Brunswick Township, and in 1971 he was elected Chairman of the South Brunswick Township Committee. Throughout 1970-1973, he also served on the Planning Board and Board of Trustees of the League of Municipalities.

His other positions are many–they include: serving on the New Jersey Turnpike Authority from 1973-1977; being a former charter trustee and treasurer for the New Jersey Museum of Agriculture; being a charter member and past president of the South Brunswick Library Board of Trustees; and serving on the Dayton Cemetery Association. Ilnicki was also a part of a team of scientists who visited the former USSR in 1983 and China in 1990. In 2010, Dr. Ilnicki passed away after a long illness. He is remembered for his work in the community of South Brunswick, and in the state of New Jersey.