What Kind Of Girl 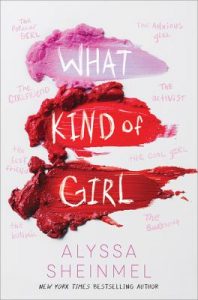 "Both timely and timeless, a powerful exploration of abuse in its many forms, as well as the strength it takes to rise up and speak your truth."—AMBER SMITH, New York Times bestselling author of The Way I Used to Be

From New York Times bestselling author Alyssa Sheinmel comes an unflinching exploration of the labels society puts on girls and women—and the strength it takes to rise above it all to claim your worth and declare your truth.

The girls at North Bay Academy are taking sides.

It all started when Mike Parker's girlfriend showed up with a bruise on her face. Or, more specifically, when she walked into the principal's office and said Mike hit her. But her classmates have questions. Why did she go to the principal and not the police? Why did she stay with Mike if he was hurting her? Obviously, if it's true, Mike should face the consequences. But is it true?

Some girls want to rally for Mike’s expulsion—and some want to rally around Mike. As rumors about what really happened spread, the students at North Bay Academy will question what it means to be guilty or innocent, right or wrong.