We Can’t All Be Rattlesnakes 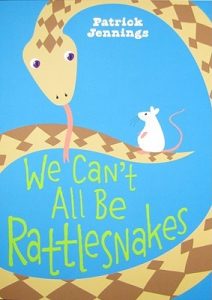 No, not a rattlesnake. I just look like one. I'm a gopher snake.

One day an oily, filthy, fleshy human child crossed my path. As luck would have it, he knew the difference between a gopher snake and a rattlesnake. He has imprisoned me in a terrarium. His name is Gunnar. He calls me Crusher. He thinks I'm male. I'm not. He dropped in a dead mouse and hoped I'd eat it. I buried it. He then dropped in a live one, which he called "Breakfast." I didn't lay a coil on it. Gunnar thinks I'll be his adoring pet. He's wrong. In fact, I am planning my escape. I may take Breakfast with me.