Trouble Maker for Justice: The Story of Bayard Rustin 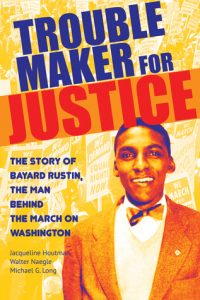 Bayard Rustin was a major figure in the Civil Rights movement. He was arrested on a bus 13 years before Rosa Parks and he participated in integrated bus rides throughout the South 14 years before the Freedom Riders. He was a mentor to Dr. Martin Luther King, Jr., teaching him the techniques and philosophy of Gandhian nonviolent direct action. He organized the March on Washington in 1963, one of the most impactful mobilizations in American history. Despite these contributions, few Americans recognize his name, and he is absent from most history books, in large part because he was gay. This biography traces Rustin's life, from his childhood and his first arrest in high school for sitting in the "whites only" section of a theater, through a lifetime of nonviolent activism.