They Better Call Me Sugar : My Journey from the Hood to the Hardwood 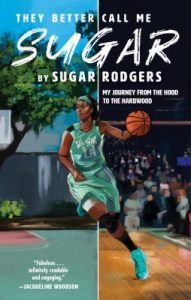 In unflinchingly honest prose, Sugar Rodgers shares her inspiring story of overcoming tremendous odds to become an all-star in the WNBA.They Better Call Me Sugar is fabulous--so infinitely readable and engaging. Sugar Rodgers is such a clear-eyed and thoughtful writer and a huge inspiration. There are so many young people I can't wait to give this book to.--Jacqueline Woodson, author of Brown Girl Dreaming, former National Ambassador for Young People's Literature[Rodgers] now has a new goal: sharing her story with others. She certainly accomplishes that in this raw, compelling memoir of a girl growing up in difficult circumstances but with the wits, confidence, and drive that made her an All-Star. An inspiring autobiography.-- BooklistWNBA champion Rodgers reflects on her childhood and road to athletic glory...Encouraging tidbits will stay with readers, such as, 'Stars are stars because they work hard even when the lights are not on'...This memoir...has a bold bounce.-- Kirkus ReviewsSugar Rodgers's story will be inspirational not only for young girls, not only for young athletes, but for everyone. You never know the mountains people have to climb to reach the level of success they have achieved.--Etan Thomas, former NBA player, author of We Matter: Athletes and ActivismHaving had the privilege of playing and working with Sugar Rodgers, I've been blessed with a front row seat to watch her grow into the woman she is today. My hope and prayer is that everyone, both young and old, gets an opportunity to read this book and let Sugar--the athlete, the woman, the survivor--have as much of an impact on their lives as she has had on mine.--Swin Cash, three-time WNBA champion, VP of Basketball Operations with the New Orleans PelicansIt would be too easy to say that Sugar Rodgers's memoir is a slam dunk. It's more than that--it's a three-pointer from deep. If you want to know what it takes to shoot for your dreams in sports and in life, read this book.--C.J. Farley, author of Around Harvard SquareGrowing up in dire poverty in Suffolk, Virginia, Sugar (born Ta'Shauna) Rodgers never imagined that she would become an all-star player in the WNBA (Women's National Basketball Association). Both of her siblings were in and out of prison throughout much of her childhood and shootings in her neighborhood were commonplace. For Sugar this was just a fact of life.While academics wasn't a high priority for Sugar and many of her friends, athletics always played a prominent role. She mastered her three-point shot on a net her brother put up just outside their home, eventually becoming so good that she could hustle local drug dealers out of money in one-on-one contests.With the love and support of her family and friends, Sugar's performance on her high school basketball team led to her recruitment by the Georgetown Hoyas, and her eventual draft into the WNBA in 2013 by the Minnesota Lynx (who won the WNBA Finals in Sugar's first year). The first of her family to attend college, Sugar speaks of her struggles both academically and as an athlete with raw honesty.Sugar's road to a successful career as a professional basketball player is fraught with sadness and death--including her mother's death when she's fourteen, which leaves Sugar essentially homeless. Throughout it all, Sugar clings to basketball as a way to keep herself focused and sane.And now Sugar shares her story as a message of hope and inspiration for young girls and boys everywhere, but especially those growing up in economically challenging conditions. Never sugarcoating her life experiences, she delivers a powerful message of discipline, perseverance, and always believing in oneself.