The Year We Disappeared: A Father-Daughter Memoir 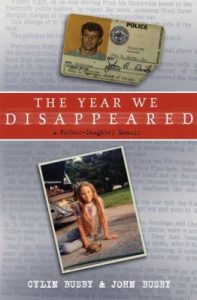 When Cylin Busby was nine years old, she loved Izod shirts, the Muppets, and her pet box turtle. Then, in the space of a night, everything that was normal about her life changed. Her police officer father, John, was driving to his midnight shift when someone pulled up alongside and leveled a shotgun at his window. The blasts that followed tore through his face and left him clinging to life. Overnight, the Busbys went from being the "family next door" to one under twenty-four-hour armed guard, with police escorts to and from school and no contact with friends. Worse, the shooter was still on the loose, and it seemed only a matter of time before he'd come after John-or someone else in the family-again. With their lives unraveling around them and few choices remaining for a future that could ever be secure, the Busby family left everything and everyone they had ever known...and simply disappeared.

As told by both father and daughter, this is a harrowing, at times heartbreaking, account of a shooting and its aftermath-even as it shows a young girl trying to make sense of the unthinkable and the triumph of a family's bravery in the face of crisis.