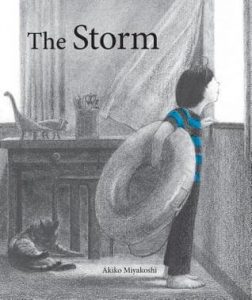 As this picture book begins, a little boy is excited about a trip to the beach with his parents planned for the following day. But a bad storm is coming, and he has started to worry they won't be able to go. He watches as the sky grows darker through the afternoon. His mother and father close the shutters and bring the potted plants indoors. Then the storm arrives. All through dinner, the rain beats hard against the shutters. The wind howls and blows, the boy says, 'I try not to be scared.' At bedtime, he thinks, 'I wish I had a ship with big propellers that would spin stronger winds to drive the storm away.' While asleep, his wish becomes his dream, and he manages to blow away the dark clouds with his imaginary vessel. Then, to his delight, when he awakens, he finds his dream of clear blue skies has come true.