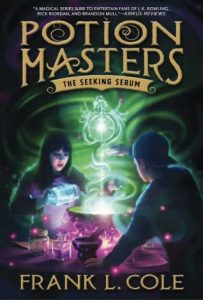 Mezzarix has stolen the Vessel, the source of power for all potion masters, and is preparing to launch his final attack on the potion-making community—which includes his own family.

Gordy and his family have gone into hiding, but when his mom uncovers some new information, she takes Gordy into the underground network known as the Swigs, a haven for renegade potion masters and black-market potions, to secure support in the fight against Mezzarix. But when Scourges, rebel potion makers acting on orders from Mezzarix, attack the Swigs, Gordy barely escapes with his life and is forced to leave his family behind.

As the fight intensifies between B.R.E.W. and the Scourges, it falls to Gordy and his friends—Max, Sasha, and Adilene—to locate Mezzarix's hidden headquarters, retrieve the Vessel, save the world, and unite the potion-making community.