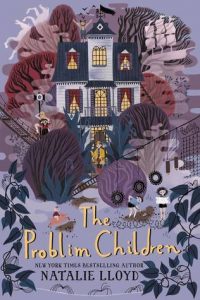 When the Problim children’s ramshackle bungalow in the Swampy Woods goes kaboom, the seven siblings and their pet pig have no choice but to move into their Grandpa’s abandoned old mansion in Lost Cove. No problem! For the Problim children, every problem is a gift.

Wendell and Thea—twins born two minutes apart on a Wednesday and a Thursday—see the move as a chance to make new friends in time for their birthday cake smash. But the neighbors find the Problims’ return problematic—what with Sal’s foggy garden full of Wrangling Ivy, toddler Toot’s 365 stanktastic fart varieties, and Mona’s human catapult.

Truth be told, rumors are flying about the Problims! Rumors of a bitter feud, a treasure, and a certain kind of magic lingering in the halls of #7 Main Street. And the neighbors will do anything to get their hands on those secrets—including sending the Problim children to seven different homes on seven different continents!