The Princess and the Warrior: A Tale of Two Volcanoes 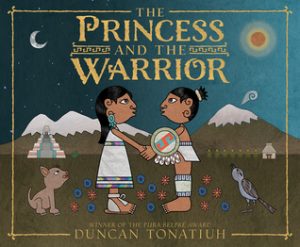 Izta was the most beautiful princess in the land, and suitors traveled from far and wide to woo her. Even though she was the daughter of the emperor, Izta had no desire to marry a man of wealth and power. Instead, she fell in love with Popoca, a brave warrior who fought in her father’s army—and a man who did not offer her riches but a promise to stay by her side forever. The emperor did not want his daughter to marry a mere warrior, but he recognized Popoca’s bravery. He offered Popoca a deal: If the warrior could defeat their enemy, Jaguar Claw, then the emperor would permit Popoca and Izta to wed. But Jaguar Claw had a plan to thwart the warrior. Would all be lost? Today two majestic volcanoes—Popocatépetl and Iztaccíhuatl—stand overlooking Mexico City. They have been admired and revered for countless generations, and have formed the basis of many origin and creation myths. In The Princess and the Warrior, award-winning author and illustrator Duncan Tonatiuh retells one of Mexico’s cherished legends.