The Incredible yet True Adventures of Alexander von Humboldt 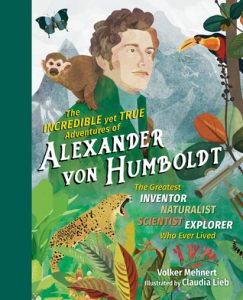 Explorer. Naturalist. All-around genius. Lost hero of science. In his time, Alexander von Humboldt (1769–1859) was world-famous. Why? He led one of the first major scientific expeditions into the South American rain forest and another into the wilds of Siberia. Carrying fragile instruments, he navigated perilous rapids and climbed the volcano of Tenerife. He observed animals, plants, and cultures that no one in Europe had ever dreamed of, and his books about them inspired a whole generation of scientists—including Charles Darwin. But before he did any of that, he was a little boy who was curious about everything (especially bugs)!