The Borden Murders : Lizzie Borden & the Trial of the Century 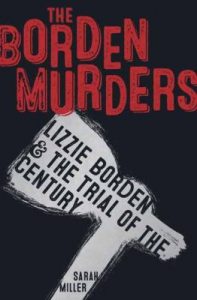 "Someone has killed Father!"August 4, 1892: Lizzie Borden calls out frantically for help. When the maid and the neighbors come running, they find Lizzie's father, Andrew Borden, lying murdered in the sitting room of the Borden home at 92 Second Street in Fall River, Massachusetts. Soon after, the body of Lizzie's stepmother, Abby, is discovered upstairs.As the minutes give way to hours, one person rises to the top of the list of suspects: Lizzie herself. But how could a mild-mannered young woman from a prominent family be an axe murderer?In a compelling narrative, Sarah Miller investigates the chilling crime - from the gruesome details of that fateful August day to Lizzie's dramatic court battles to the role sensational newspaper headlines played in swaying public opinion. Enhanced by period photos, newspaper clippings, and, yes, even an image of the crime scene, this is middle-grade nonfiction that races like a true-crime novel. Prepare to devour it and to grapple with the same questions a nation asked itself over a century ago: Did Lizzie do it? And if not, who did?