The Book of Chocolate 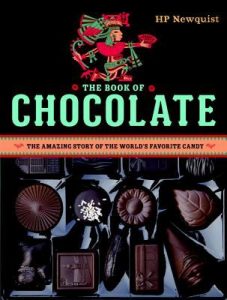 Chocolate . . .
- Its scientific name means "food of the gods."
- The Aztecs mixed it with blood and gave it to sacrificial victims to drink.
- The entire town of Hershey, Pennsylvania was built by Milton Hershey to support his chocolate factory. Its streetlights are shaped like chocolate Kisses.
- The first men to climb to the top of Mount Everest buried a chocolate bar there as an offering to the gods of the mountain.
- Every twenty-four hours, the U.S. chocolate industry goes through eight million pounds of sugar.
- Its special flavor is created by a combination of 600 to 1000 different chemical compounds

Join science author HP Newquist as he explores chocolate's fascinating history. Along the way you'll meet colorful characters like the feathered-serpent god Quetzalcoatl, who gave chocolate trees to the Aztecs; Henri Nestle, who invented milk chocolate while trying to save the lives of babies who couldn't nurse; and the quarrelsome Mars family, who split into two warring factions, one selling Milky Way, Snickers, and 3 Musketeers bars, the other Mars Bars and M&M's. From its origin as the sacred, bitter drink of South American rulers to the familiar candy bars sold by today's multimillion dollar businesses, people everywhere have fallen in love with chocolate, the world's favorite flavor.