The Ballad of a Broken Nose 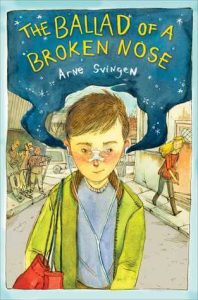 Bart is an eternal optimist. At thirteen years old, he’s had a hard life. But Bart knows that things won’t get any better if you have a negative attitude. His mother has pushed him into boxing lessons so that Bart can protect himself, but Bart already has defense mechanisms: he is relentlessly positive…and he loves opera.

Listening to—and singing—opera is Bart’s greatest escape, but he’s too shy to share this with anyone. Then popular Ada befriends him and encourages him to perform at the school talent show. Ada can’t keep a secret to save her life, but Bart bonds with her anyway, and her openness helps him realize that his troubles are not burdens that he must bear alone.