The American Plague : the untold story of yellow fever, the epidemic that shaped our history 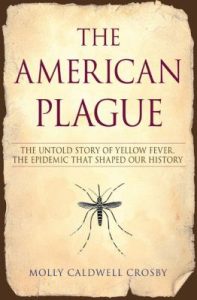 Slave ships brought it to America as far back as 1648-and over the centuries, yellow fever epidemics plagued the United States. Carried along the mighty Mississippi River, it ravaged towns from New Orleans to St. Louis. New York City lost 2,000 lives in one year alone. It even forced the nation's capital to relocate from Philadelphia to Washington, DC."The American Plague" reveals the true story of yellow fever, recounting Memphis, Tennessee's near-destruction and resurrection from the epidemic-and the four men who changed medical history with their battle against an invisible foe that remains a threat to this very day.