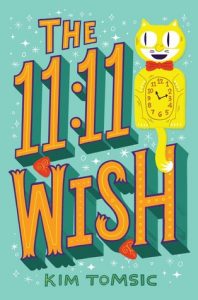 Megan Meyers has a foolproof plan to reinvent herself at her new middle school. But when she’s dared to make something exciting happen by the end of her first day, Megan gets stuck in the middle of an epic rivalry between the two most popular girls in the seventh grade. And totally panics! Megan’s reputation has always been more science-geek-meets-Humane-Society-volunteer than party-planner-fun-maker. So, with nothing to lose as her classroom’s strange cat clock chimes 11:11 a.m., Megan makes a wish. And it comes true! In the form of an enchanted teen magazine that promises back-to-school makeovers and the secrets to winning over friends and crushes.

But each wish comes with its own Pinocchio-esque side effects, and soon Megan finds herself coughing up hairballs as she makes bigger and bigger promises to her new friends. Now, if she can’t impress the school with the most spectacular kickoff event for Spirit Week they’ve ever seen—without using magic—her social life will be doomed and Megan may remain feline and friendless forever.