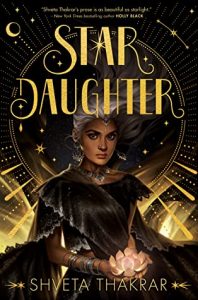 If the night sky holds many secrets, it holds Sheetal Mistry's secret the closest. A secret that explains why her hair is the silver of starlight, or why some nights the stars call Sheetal by name.Stars like her mother, who returned to her place in the constellation Pushya years ago. Since that day, Sheetal has been forced to hide.But as her seventeenth birthday draws near, the pull from the sky is growing stronger. So strong that Sheetal loses control, and a flare of starfire burns her human father—an injury only a full star's blood can heal.Sheetal has no choice but to answer the starsong and ascend to the sky. But her celestial family has summoned her for a reason: to act as their human champion in a competition to decide the next ruling house of heavens.Desperate to save her father, Sheetal agrees. But nothing could have prepared Sheetal to face the stars' dark history—or the forces that are working to shut the gate between the realms for good.