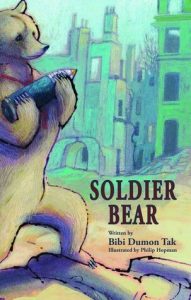 Based on a real series of events that happened during World War II, Soldier Bear tells the story of an orphaned bear cub adopted by a group of Polish soldiers in Iran. The soldiers raise the bear and eventually enlist him as a soldier to ensure that he stays with the company. He travels with them from Iran to Italy, and then on to Scotland. Voytek's mischief gets him into trouble along with way, but he also provides some unexpected encouragement for the soldiers amidst the reality of war: Voytek learns to carry bombs for the company, saves the camp from a spy, and keeps them constantly entertained with his antics.