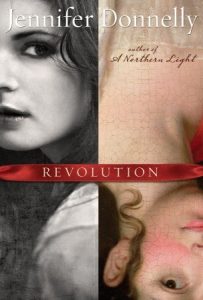 BROOKLYN: Andi Alpers is on the edge. She’s angry at her father for leaving, angry at her mother for not being able to cope, and heartbroken by the loss of her younger brother, Truman. Rage and grief are destroying her. And she’s about to be expelled from Brooklyn Heights’ most prestigious private school when her father intervenes. Now Andi must accompany him to Paris for winter break.

PARIS: Alexandrine Paradis lived over two centuries ago. She dreamed of making her mark on the Paris stage, but a fateful encounter with a doomed prince of France cast her in a tragic role she didn’t want—and couldn’t escape.

Two girls, two centuries apart. One never knowing the other. But when Andi finds Alexandrine’s diary, she recognizes something in her words and is moved to the point of obsession. There’s comfort and distraction for Andi in the journal’s antique pages—until, on a midnight journey through the catacombs of Paris, Alexandrine’s words transcend paper and time, and the past becomes suddenly, terrifyingly present.