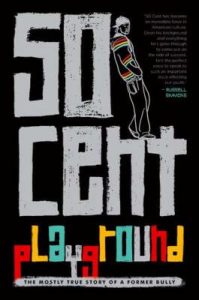 Thirteen-year-old Butterball doesn’t have much going for him. He’s teased mercilessly about his weight. He hates the Long Island suburb his mom moved them to and wishes he still lived with his dad in the city. And now he’s stuck talking to a totally out-of-touch therapist named Liz.

Liz tries to uncover what happened that day on the playground—a day that landed one kid in the hospital and Butterball in detention. Butterball refuses to let her in on the truth, and while he evades her questions, he takes readers on a journey through the moments that made him into the playground bully he is today.

This devastating yet ultimately redemptive story is told in voice-driven prose and accented with drawings and photographs, making it a natural successor to The Absolutely True Diary of a Part-Time Indian.

Loosely inspired by 50 Cent’s own adolescence, and written with his fourteen-year-old son in mind, Playground is sure to captivate wide attention—and spark intense discussion.