Other Side of the Tracks 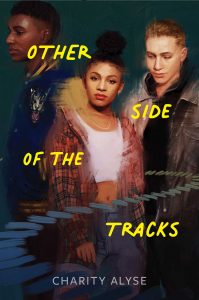 Title: Other Side of the Tracks
Book List: A Celebration of Black Voices in Teen Fiction
Author: Charity Alyse
Genre: Teen
Pages: 448

There is an unspoken agreement between the racially divided towns of Bayside and Hamilton: no one steps over the train tracks that divide them. Or else.Not until Zach Whitman anyway, a white boy who moves in from Philly and who dreams of music. When he follows his dream across the tracks to meet his idol, the famous jazz musician who owns The Sunlight Record Shop in Hamilton, he’s flung into Capri Collins’s path.Capri has big plans: she wants to follow her late mother’s famous footsteps, dancing her way onto Broadway, and leaving this town for good, just like her older brother, Justin, is planning to do when he goes off to college next year. As sparks fly, Zach and Capri realize that they can help each other turn hope into a reality, even if it means crossing the tracks to do it.But one tragic night changes everything. When Justin’s friend, the star of Hamilton’s football team, is murdered by a white Bayside police officer, the long-standing feud between Bayside and Hamilton becomes an all-out war And Capri, Justin, and Zach are right in the middle of it.