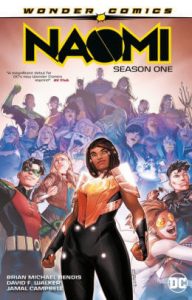 A local teenager named Naomi starts looking into what happened the last time a super-being visited her hometown—and how that visit might tie into her own origins as an adopted child. But Naomi's seemingly harmless curiosity exposes more than just her family's startling secrets—it attracts the attention of forces that could threaten the Earth itself! Learning the truth about her heritage will turn Naomi's life upside down. Can she learn to control her uncanny new abilities and come to terms with her strange new place in the world before it's too late?