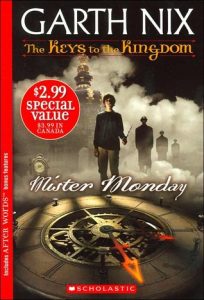 Arthur Penhaligon's first days at his new school don't go too well, particularly when a fiendish Mister Monday appears, gives Arthur a magical clock hand, and then orders his gang of dog-faced goons to chase Arthur around and get it back. But when the confused and curious boy discovers that a mysterious virus is spreading through town, he decides to enter an otherworldly house to stop it. After meeting Suzy Blue and the first part of "the Will" (a frog-looking entity that knows everything about the House), Arthur learns that he's been selected as Rightful Heir to the House and must get the other part of the clock hand in order to defeat Monday. That means getting past Monday's henchmen and journeying to the Dayroom itself. Thankfully, Arthur is up to the challenge, but as he finds out, his fight seems to be only one-seventh over.With a weapon-wielding hero and a villain who doesn't make Mondays any nicer, Nix's Keys to the Kingdom launch is imaginative and gripping. After an action-packed crescendo to the book's middle -- when Arthur finally learns his destiny -- Nix keeps the drama going and doesn't let it fall. By the end, you might be winded from all the fantastic explanation, but you'll definitely be salivating for what's to come.