Melonhead and the Big Stink 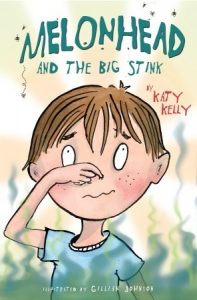 Melonhead is still pals with Lucy Rose, but he's not going to Parks & Rec camp this summer. He ruined one of Mrs. Wilkins's favorite garden plants, so his parents have "loaned" him to her to do chores. This is going to mess up his summer plans if he doesn't figure something out. He and Sam need to find a way to get to New York City to see the titan arum "bunga bangkai" plant. It's supposed to be twelve feet tall, weigh a hundred pounds, and smell like dead mammals, plus rot, plus spoiled food. It only blooms once every seven years, and even then only for two days and then it keels over dead. It's the Big Stink of a Lifetime! But Melonhead has to get a few more good deeds out of the way first, and doing chores for Mrs. Wilkins is a good start, even if it wasn't in the plan to begin with!