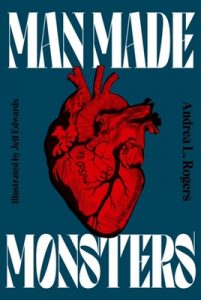 Making her YA debut, Cherokee writer Andrea L. Rogers takes her place as one of the most striking voices of the horror renaissance that has swept the last decade.Horror fans will get their thrills in this collection – from werewolves to vampires to zombies – all the time-worn horror baddies are there. But so are predators of a distinctly American variety – the horrors of empire, of intimate partner violence, of dispossession. And so too the monsters of Rogers’ imagination, that draw upon long-told Cherokee stories – of Deer Woman, fantastical sea creatures, and more.Following one extended Cherokee family across the centuries, from the tribe’s homelands in Georgia in the 1830s to World War I, the Vietnam War, our own present, and well into the future, each story delivers a slice of a particular time period that will leave readers longing for more.Alongside each story, Cherokee artist and language technologist Jeff Edwards delivers haunting illustrations that incorporate Cherokee syllabary.But don’t just take it from us – award-winning writer of The Only Good Indians and Mongrels Stephen Graham Jones says that "Andrea Rogers writes like the house is on fire and her words are the only thing that can put it out."