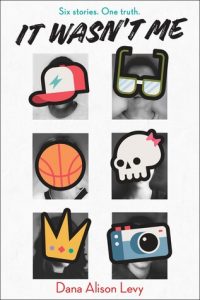 When Theo’s photographs are vandalized and trashed beyond all recognition, there are five kids at the scene: The Nerd, the Princess, the Jock, the Weirdo, and the Screw-Up.
All anyone will say is “It wasn’t me.”
Theo doesn’t care who it was, he just wants to stop being the victim. The sooner the school forgets the whole humiliating thing, the better. But his favorite teacher is asking the six of them to spend vacation week together “learning to trust” and getting to the truth. She calls it a Justice Circle. He calls it his worst nightmare.
Theo knows everything he needs to know about his classmates, and he’s sure this Justice Circle is going to be an epic and totally mortifying waste of time. But after a few days of sock puppets gone wrong, artificial flesh wounds, and dangerous candy reconnaissance missions, he’s not so certain. As they share their secrets, Theo realizes that he doesn’t know anyone as well as he thought, not even himself. And the truths they share might change their lives forever.