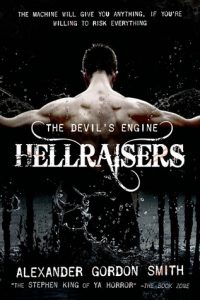 The Devil’s Engine is a machine from the darkest parts of history. It can make any wish come true—as long as you are willing to put your life on the line. When a sixteen-year-old asthmatic kid named Marlow Green finds himself trapped in a surreal firefight against nightmarish creatures in the middle of his New York City neighborhood, he discovers a squad of secret soldiers dedicated to battling the legions of the Devil himself. Faced with monstrous apparitions, ancient weaponry, and his own hellishly tedious high school existence, Marlow submits to a demonic deal with the infernal device that enables him to join the battle—if it doesn’t kill him first.