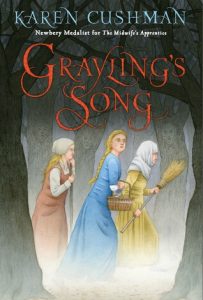 When Grayling’s mother, wise woman Hannah Strong, starts turning into a tree, Hannah sends Grayling to call “the others” for help. Shy and accustomed to following her mother in everything, Grayling takes to the road. She manages to summon several “others”—second-string magic makers who have avoided the tree spell—and sets off on a perilous trip to recover Hannah’s grimoire, or recipe book of charms and potions. By default the leader of the group, which includes a weather witch, an enchantress, an aspiring witch, a wizard whose specialty is divination with cheese, and a talking and shape shifting mouse called Pook, Grayling wants nothing more than to go home.

Kidnapping, imprisonment, near drowning, and ordinary obstacles like hunger, fatigue, and foul weather plague the travelers, but they persist and achieve their goal. Returning, Grayling finds herself reluctant to part with her companions—especially Pook. At home she’s no longer content to live with her bossy mother, who can look after herself just fine, and soon sets out on another journey to unfamiliar places . . . possibly to see the young paper maker who warmed her heart.