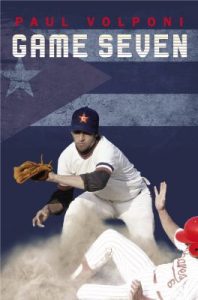 My name is Julio Ramirez Jr. and baseball is my whole life.

Since he was ten, Julio has lived in the shadow of his famous father.  Not just because Julio Senior is a pitcher for the Miami Marlins, but because he fled Cuba to play professional baseball, leaving his Julio and his mother and sister branded as the family of a traitor.

Now sixteen, Julio dreams of playing for Cuba’s national team—until he finds out his father's defection may destroy his chances.  When he’s given the opportunity to flee Cuba, he has to make the toughest choice of his life.  Can he abandon his family, just like his Papi did?  Will freedom be worth the perilous journey and risking prison if he’s caught?  Will his Papi be waiting for him on the other shore—or, with the Marlins in the World Series against the Yankees, has Julio Senior forgotten about his son?

Set against the backdrop of the Series on which everything depends, Game Seven is a suspenseful story of loyalty, survival, and baseball.