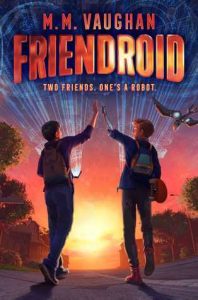 For Danny, it becomes hard to ignore Eric’s super strange tendencies. He has weekly “dentist” appointments and parents who never stop smiling. It’s almost impossible to wake him up and he’s always getting fancy gifts from his mysterious uncle. Danny always assumed that Eric was just a spoiled rich kid…until he discovers Eric’s hidden robot reality.

As the two friends dig deeper into Eric’s origins and purpose, powerful forces swarm into town, and Danny and Eric are left with more questions than answers—and more danger than humanly possible.