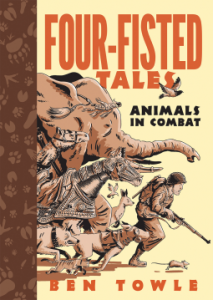 In virtually every military conflict in recorded history animals have fought—and often died—alongside their human counterparts. While countless stories of the men and women who’ve served in the trenches, jungles, and deserts of the world’s battlefields have been told, Four-Fisted Tales: Animals in Combat shares the stories of the animals who fought alongside them.From Hannibal’s elephants in ancient Rome to mine-sniffing rats in Vietnam and everything in between, Four-Fisted Tales highlights the real-life contributions of these underappreciated animal warriors. Whether in active combat or simply as companions, these animals served and made their mark on history.