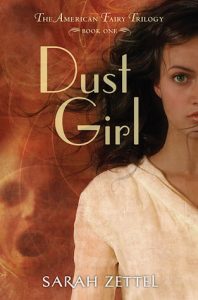 Callie LeRoux is choking on dust. It seeps through the cracks in the hotel that Callie and her mother run in Kansas. It’s slowly filling her lungs. Callie’s begged her mother to leave their town, like their neighbors have already done, but her mother refuses. She’s waiting for Callie’s long-gone father to return.Just as the biggest dust storm in history sweeps through the Midwest, Callie discovers her mother’s long-kept secret. Callie’s not just mixed race — she’s half fairy, too. Now, Callie’s fairy kin have found where she’s been hidden, and they’re coming for her. The only person Callie can trust may be Jack, the charming ex-bootlegger she helped break out of jail.From the despair of the Dust Bowl to the hot jazz of Kansas City, from dance marathons to train yards, to the dangerous beauties of the fairy realm, Sarah Zettel creates a world rooted equally in American history and in magic, where two fairy clans war over a girl marked by prophecy.