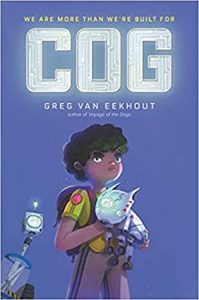 Cog looks like a normal twelve-year-old boy. But his name is short for “cognitive development,” and he was built to learn.But after an accident leaves him damaged, Cog wakes up in an unknown lab—and Gina, the scientist who created and cared for him, is nowhere to be found. Surrounded by scientists who want to study him and remove his brain, Cog recruits four robot accomplices for a mission to find her.Cog, ADA, Proto, Trashbot, and Car’s journey will likely involve much cognitive development in the form of mistakes, but Cog is willing to risk everything to find his way back to Gina.