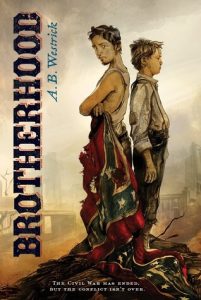 The year is 1867, the South has been defeated, and the American Civil War is over. But the conflict goes on. Yankees now patrol the streets of Richmond, Virginia, and its citizens, both black and white, are struggling to redefine their roles and relationships. By day, fourteen-year-old Shadrach apprentices with a tailor and sneaks off for reading lessons with Rachel, a freed slave, at her school for African-American children. By night he follows his older brother to the meetings of a group whose stated mission is to protect Confederate widows like their mother. But as the true murderous intentions of the brotherhood—-now known as the Ku Klux Klan—-are revealed, Shad finds himself trapped between old loyalties and what he knows is right.