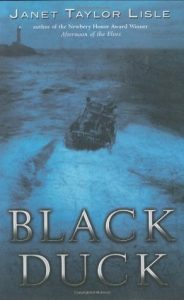 When Ruben and Jed find the dead body on the Rhode Island shore, they are certain it has something to do with smuggling liquor. It is the 1920’s, Prohibition is in full swing, and almost everyone in the shore community is involved. Suddenly, the boys find themselves involved as well: Didn’t the dead man have something on him, and didn’t they take it? It isn’t long before Ruben is actually on the legendary Black Duck itself, caught in a war between two of the most ferocious prohibition gangs.