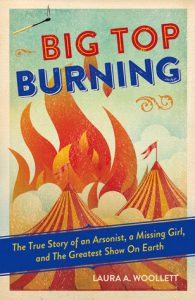 On July 6, 1944, thousands of fans made their way to Barbour Street in Hartford, Connecticut, to see the Ringling Bros. and Barnum & Bailey Circus performance. Not long after the show’s start, a fire broke out and spread rapidly as panicked circus-goers pushed and scrambled to escape. Within 10 minutes the entire big top had burned to the ground, and 167 people never went home.

Big Top Burning recounts the true story of one of the worst fire disasters in US history. It follows the tragic stories of the Cook family—including children Donald, Eleanor, and Edward, who were in the audience that day—and 15-year-old Robert Segee, a circus employee with an incendiary past. Drawing on primary sources and interviews with survivors, author Laura Woollett guides readers through several decades of investigations and asks, Wasthe unidentified body of a little girl nicknamed“Little Miss 1565” Eleanor Cook?Was the fire itself an act of arson—anddid Robert Segee set it? Young readers are invited to evaluate the evidence and draw their own conclusions.

Combining a gripping disaster story, an ongoing detective and forensics saga, and vivid details about life in World War II–era America, Big Top Burning is sure to intrigue any history or real-life mystery fan.