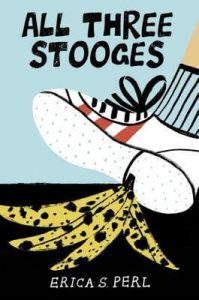 Spoiler alert: This book is not about the Three Stooges. It's about Noah and Dash, two seventh graders who are best friends and comedy junkies. That is, they were best friends, until Dash's father died suddenly and Dash shut Noah out. Which Noah deserved, according to Noa, the girl who, annoyingly, shares both his name and his bar mitzvah day.

Now Noah's confusion, frustration, and determination to get through to Dash are threatening to destroy more than just their friendship. But what choice does he have? As Noah sees it, sometimes you need to risk losing everything, even your sense of humor, to prove that gone doesn't have to mean "gone for good."