All the Way to the Top: How One Girl’s Fight for Americans with Disabilities Chanaged Everything 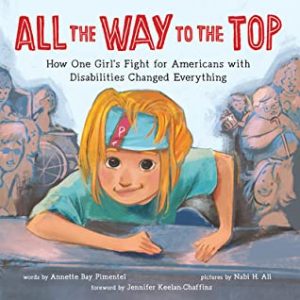 Title: All the Way to the Top: How One Girl's Fight for Americans with Disabilities Chanaged Everything
Book List: Equality-Picture Books
Release Date: 2020
Author: Annette Bay Pimental

Experience the true story of lifelong activist Jennifer Keelan-Chaffins and her participation in the Capitol Crawl in this autobiographical picture book.  This is the story of a little girl who just wanted to go, even when others tried to stop her.  Jennifer Keelan was determined to make a change―even if she was just a kid. She never thought her wheelchair could slow her down, but the way the world around her was built made it hard to do even simple things. Like going to school, or eating lunch in the cafeteria.  Jennifer knew that everyone deserves a voice! Then the Americans with Disabilities Act, a law that would make public spaces much more accessible to people with disabilities, was proposed to Congress. And to make sure it passed, Jennifer went to the steps of the Capitol building in Washington DC to convince them.