A Storm Too Soon 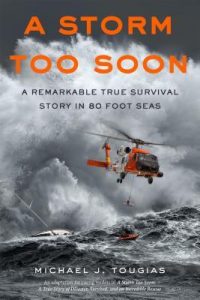 When a forty-seven-foot sailboat disappears in the Gulf Stream during a disastrous storm, it leaves behind three weary sailors struggling to stay alive on a life raft in the throes of violent waves eighty feet tall. This middle-grade adaptation of an adult nonfiction book tells the story of the four intrepid Coast Guardsmen who braved the sea and this ruthless storm, hoping to rescue the stranded sailors.