A Step from Heaven 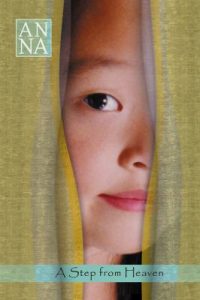 In this first novel, a young girl describes her family's bittersweet experience in the United States after their emigration from Korea. While going up and up into the sky on the flight from Korea to California, four-year-old Young Ju concludes that they are on their way to heaven - America is heaven! After they arrive, however, Young Ju and her parents and little brother struggle in their new world, weighed down by the difficulty of learning English, their insular family life, and the traditions of the country they left behind. An Na's striking language authentically reflects the process of acculturation as Young Ju grows from a child to an adult.